Home News All The Way for Our Five-Eighth

All The Way for Our Five-Eighth

Christine Okesene is not your average thirteen year old. In just four short years the speedster has joined the ranks of Queensland’s best female rugby league players. The Redbank Bears five-eighth is one step closer to representing her state, after being chosen for the South-East Queensland under-14s team. The team plays its inaugural game in Toowoomba this weekend. 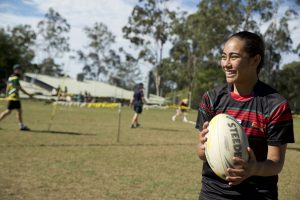 Christine will make her debut this weekend representing South-East Queensland.

The Year Nine student is passionate about the sport. She knows the value of hard work, “We’ll play five games in one weekend. It’ll be tough, but I’m looking forward to it.“

Christine has been a Westside student for two years. and has grown immensely during that time, “Being at Westside is a good opportunity for me. Here I learn about academics and sport, but also learn about God as well. God is a big part of my culture and my life.”

This is not the first time Christine has been chosen for representative duties. Amongst others, she previously made the under 12s Metropolitan West touch football team.

Christine plans to join the police force or the army after school.