In 1972, the Courier Mail announced that a group of parents had purchased a small plot of land in Goodna and planned to build a school, by hand. And they did – after seventeen years of fund-raising.

From humble beginnings of 53 enrolments and one block, the College is now home to more than 1,000 students across two campuses. Westside Christian College (then Goodna Christian School) continues to grow as a vital part of the community.

On Friday 26th May, more than 1,200 students, staff, parents, friends and dignitaries attended a formal dedication ceremony on the secondary campus. Ably hosted by College Captains Spencer Wilson and Patricia Mercado, the morning consisted of the primary and secondary choirs, performances by the symphonic band and speeches by dignitaries. Amongst those in attendance were Milton Dick MP, Ipswich Mayor Paul Pisasale, Cr David Morrison and Deputy Mayor Paul Tully. Mr Dick flew up from Canberra especially for the ceremony. 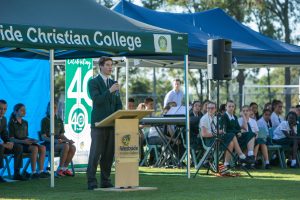 In reflecting on his 38-year relationship with Westside, Cr Tully noted “I can say without any hesitation, what this school has achieved over the past 40 years is strongly recognised in the community.”

Having taken the reins in 2016, College Principal Barry Leverton praised the hard work and dedication of those who have made the College what it is: “A school is not just bricks and mortar. It is made up of people, past and present, who have established the culture that gives the place its particular atmosphere” he continued “After forty years we should be justifiably pleased of what this College community has become.”

The formal proceedings continued into the night, with a black-tie dinner for some 150 guests, including Cr David Morrison, a former teacher at the College.

The dinner, held on the newly renovated Primary campus, was a time of reflection and reconnection. Among the guests were those active in the 1960s, fundraising for almost two decades before the College opened its gates.

Capping off the dinner was the premiere of a documentary produced by Ipswich filmmaker and former Westside student, Joel Tronoff. Through a series of candid interviews, he looked back at the College’s  history and sought insight into its future. Ipswich-based jazz and contemporary live music outfit, Nightshade, provided the night’s entertainment.

Speaking on the role of the College in the community, June Balfour, Director of Learning said “the celebration was buttressed on one side by a whole-school student fundraiser and on the other by Queensland Cancer Council’s Relay for Life. This alone speaks volumes. We were the highest youth fundraising team at the Relay with almost one-in-ten students participating on the night.”

Mr Leverton comments “We should look to the future with great optimism, knowing that we have a very firm foundation on which to build. We give our thanks to God.” In a couple of months the construction of Stage 1 of the new Creative Industries precinct will commence.