Celebrating a Culture of Excellence

It seems like just yesterday we rung in the new year. Hopes and dreams and resolutions filled the air.  Did you keep those promises?

On Tuesday 18th October, students from Years 7-12 were recognised at our annual Cultural and Sports Awards Ceremony. It marks the culmination of a year of resolutions kept by students to work hard, stay focussed, and excel in all they do.

The ceremony reflected the increasing academic literature, which highlight the vital roles of creativity and physical health in a well-rounded education. 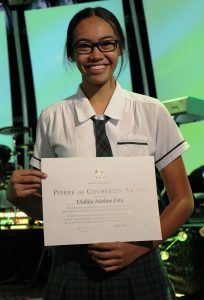 Adeline receiving the Pierre de Coubertin Award, which reflects the spirit of the Olympic movement.

Presenting at the awards, Mr Chris Hollier, Instructional Dean for Creative Arts noted, “What we’ve seen here today is a celebration of the depth of talent and determination which Westside is known for.”  Head of Secondary, Mr Joshua Mansfield noted “The awards recognise not only outstanding talent, but consistency of effort over the year and that’s as important as any academic achievement.”

Some of the highlights from the day included:

Sports Co-ordinator, Mrs Lynda Williams was quick to recognise the competitiveness of the College “We placed well in several elite carnivals and had students representing their country and state. We always punch above our weight. This is the Westside spirit.”

Chris Hollier reflected on the booming cultural strength of the secondary College, noting Mr Wayne Hiron and Miss June Balfour both produced original plays, and the growth of the Funk Jazz Rock band, an elite group of performers across the secondary school, to 18 members.

Westside Christian College’s commitment to the Creative Industries is affirmed by the commencement of a several-stage Creative Arts precinct, scheduled to break ground in January 2017.