Home News It PAIS to Make a Difference

It PAIS to Make a Difference

It’s not easy to pack your life into a suitcase and fly half-way around the world to serve someone you’ve never met, but that’s what the PAIS Team have done and they’re making a difference at Westside.

The PAIS Team are a group of international volunteers working under the leadership of Ben Kulp, a former Westside student, who is the Youth and Young Adults Pastor, at Whitehill Church of Christ. They are in Australia serving a mission internship. They have spent much of their time over the last 12 months at Westside, involving themselves in Service, Biblical Studies and other activities on the Secondary Campus.

The adventurous team hails from nations as far away as Brazil. At Westside they are led by College Chaplain, Serena Langenbruch. Each Wednesday Julia Penny (USA) and Kassidy Cunningham (USA)  accompany our S.E.E. students to Jamie Oliver’s Ministry of Food.

I appreciate Serena’s oversight of the team while they are here at college. – Head of Secondary, Joshua Mansfield. 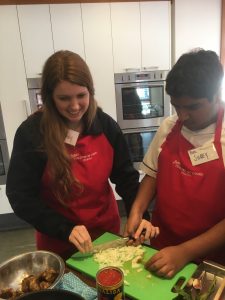 Head of Secondary, Joshua Mansfield is thrilled at the prospect of greater involvement with PAIS, “I really appreciate the humble way in which the PAIS Team serve our College community. They don’t make a fuss, they get alongside students and show them God’s grace through serving them and talking to them about Jesus.“

But it’s not all fun and food. Aside from being a familiar face in Biblical Studies and Year Level Assemblies, they can be found in year level areas playing games, getting to know students and their needs, or even teaching Portuguese. Thanks, Felipe Chrispim (Brazil).

The more time Garret Baird (USA) spends in Australia, the better he gets using the BBQ. The team will be found providing entertainment, refreshments and food in the Year 12 area on QCS Days and will be cooking up a storm on Multicultural Day later this year.

Westside is thankful to have the PAIS Team assisting us and building relationships with students as they seek to point them to the good news of Jesus Christ, in English and Portuguese.