Home News On the Wright Path to Success

On the Wright Path to Success

It’s the first day of School for 2018. A sea of new and old faces abound. The bell rings. James Wright steps forward to the microphone and looks at the assembled cohort. He utters the name Arthur Stace and the word eternity.

Like Mr Stace, the man who sprawled that iconic word more than 500,000 times over 30 years, James has his eyes fixed on the future. He encourages his peers to do the same. 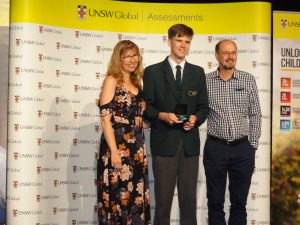 James, Westside Christian College Boys’ Captain for 2018, is a humble figure. Few knew of his entry in Australia’s premiere science competition, the ICAS Science competition, and even fewer would know that at the Brisbane Convention and Exhibition Centre on December 2017, he was recognised as the highest achieving Year 11 participant in Queensland. When asked, James quietly reflects “I’ve always had a passion for science, but I never expected to do this well. It reassures me that if you work hard enough, anything is possible.” This is the encouragement he brings to his peers as he recounts Stace’s ordinary life, augmented by an extra-ordinary passion.

Standing beside Girls’ Captain, Zoe Acutt, he continues recalling the life of the unassertive man whose tag would one-day adorn the Harbour Bridge. Stace, an inquisitive veteran of the Great War, was drawn one day to a church, where he heard the preacher lament how he wished all of Sydney would give thought to their future. Nola Leverton, Instructional Dean of Science, relates, “James is passionate about exploring the unknown and asking life’s big questions. He also has the gift of a lateral thinking mind which he capitalises on in the enquiry Science-based subjects.”

Westside Christian College looks forward to an exciting 2018, with James and Zoe at the helm.

In 2016, James was a part of the near record-breaking team of state finalists in the University of Queensland Science and Engineering Challenge. There, he competed against some of Brisbane and Ipswich’s most prestigious schools, working to provide solutions to real-world problems across multiple disciplines.