Home News One Txai That’s too hot to Catch

One Txai That’s too hot to Catch

The Westside Christian College student hopes to compete in 2022 Commonwealth Games and 2024 Olympics.

Anglin was invited to audition for Sydney and Brisbane production of Lion King and has performed alongside Christine Anu and Simon Bourke.

Txai crouches down at the starting blocks. Her eyes are firmly fixed ahead. She takes a breath. Stares at the faint white line shimmering in the distance.

And 58.89 seconds later, Txai becomes the third fastest Under 14 years girls runner in Australia. And she is only twelve years old. A full year younger than many of her competitors. 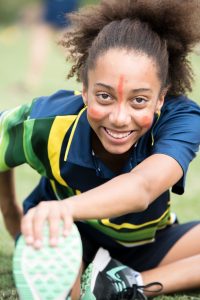 Txai Anglin is a tall brunette determined to succeed. Like her hero, Usain Bolt, she is a born runner. The all-round talent carries on a proud Jamaican heritage of outstanding sprinters, with a dash of Australian flavour. Reflecting on her accidental start in running, she laughs “When I was 5 I ran my first cross country in Canberra. I got lost and went back to ask someone where to go and I still came first.”

The Year 7 student trains at least three nights per week, despite the demands of high school. Thinking about the community effort she reflects “My mum, dad and church community are my biggest supporters.” To add to this, during competition season, she can expect to compete at least once per week. “Westside teachers have helped me stay on track and have been really flexible with me.”

Txai is the most recent of a number of high performance athletes passing through the gates of the College, which includes Kirsty Johnson, Australian All Schools Athletics Champion and national under 15 years 400m champion.

Txai, “My dream is to compete for Australia in the Commonwealth Games in 2022 and the Olympics in 2024.  I would love to meet Usain Bolt one day. We went to Jamaica last year but Bolt was overseas training for the Olympics.”

Whilst the star of the track, the humble Txai is really a team player at heart, playing saxophone in various College bands. When she’s not setting records, she pursues her other passion, musical theatre. Anglin was invited to audition for the Sydney and Brisbane production of The Lion King and has performed alongside Christine Anu and Simon Bourke in Harvest Rain’s latest performance of the hit musical, Hairspray. When asked what drives her, she responds “Your talent is God’s gift to you, what you do with it is your gift back to God,” adding “My coach Joanna Spyro is such a great coach. She really knows how to help me achieve my best.”

And when asked about the big question on everyone’s lips, she smiles “It’s pronounced Chai, like the drink.”

In 2017, Westside Christian College celebrates 40 years of having been a part of the Goodna community. It is a co-educational school from Prep-Year 12, spread across two campuses.