When the opposition barrels towards you and the game seems surely lost, there’s only one person you want on your side: Jemma Ballantyne.

Jemma is one of the most sought-after defenders in the National Premier League. At only fourteen years old, UQFC’s blonde firebrand has been selected to don the maroon Queensland jersey for a third time. “I love representing my state” she beams, juggling the ball.

In the September holidays Jemma will fly to Tokyo to take on the best footballers Japan has to offer. “They’re really good players and I’ve seen them play on TV”, she says with some excitement. “Being a defender means the pressure will really be on. After me there’s only the goal keeper.”

The Westside Christian College student knows all too well Australia’s mixed record against Japan: in 2015, they knocked out the Matildas in the quarterfinals of the 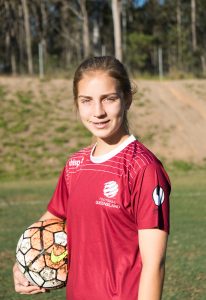 Jemma is ready to represent her state at the highest level.

In February this year, they went down 3-1 to the Aussies in an Olympic qualifying thriller.

Reflecting on her selection, she smiles “I was really ecstatic when the selectors announced the shadow team at the presentation ceremony after the tournament.”

For Jemma, this is their first competitive trip overseas. It is not something she takes lightly, “I’ve never been overseas without my family. It’s so nice to know though that my school and my family and friends are behind me. It will definitely give me strength.”

The University of Queensland FC star is currently playing her seventh year of competitive football. At the most recent State Football Trials, she was named Metropolitan West player of the tournament.

However, there’s more to this speedster than meets the eye; she is also a high-achieving student with a passion for learning. Playing for UQFC has given her some insight into a future outside of football “I try really hard to balance my studies because I would like to go to uni in the future”. Despite training up to four days per week and attending development clinics, she still finds time to be a regular teenager “I love my friends and family and spending time with them”.

When asked about her future, she replies “I want to one day play in the W-league for Brisbane Roar, but I know there’s life outside of football. I need to take every opportunity I can.”

Closer to home, Jemma plays on Westside’s Intermediate Girls team. Like her parents, coach Matthew Taylor is similarly proud “she’s so good because she’s so humble. She doesn’t chase recognition or boast. She just plays and gets behind the girls 100%.”

With a stunning record and a bright future, the maroon-clad Jemma is one to look out for.