Stanley onto a Shaw Thing

If someone asked you to design a world-class drone in only three days, what would you say? Year 10 student Stanley Shaw said ‘yes’. And it’s paying dividends.

Seen as the future of Australian education, STEM puts Science, Technology, Engineering and Maths into real world contexts. To celebrate National Science Week, entrants were given the task of designing a solution to a very Australian problem: monitoring thousands of hectares of land, effectively. The Australia-New Zealand competition involved hundreds of schools with Stanley finishing in the top six.

The Westside Christian College student’s secret to success is a missing letter: A. Arts. The journey into the world of drones began three years ago with a foray into filmmaking. The young creative recalls, “Well, my first stop motion production won two awards at IFFY [Ipswich Film Festival for Youth]. I used the prize money to build a computer for CGI creation and rendering. I realised then that creative arts and STEM go together, so STEAM, I guess.” 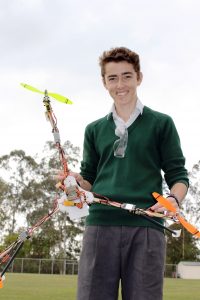 The skateboard-loving teen was sitting on assembly when Joshua Mansfield, Head of Secondary, delivered the good news to students. Stanley was unaware. The fourteen year old was humbled at the announcement, “It was awesome finding out the results. To be congratulated by Mr Mansfield and have the recognition for the achievement felt great.”

He shared his prize, a $100 pizza party, with his science class. One student, hands full of pizza joked, “If he won a competition every week, I wouldn’t need to bring in lunch!”

Whilst Stanley is better known in Ipswich for his award-winning CGI films, the competition solidified his career choice. When asked his plans he beamed “ I enter this challenge as designing, aviation and science are three things I love to do.” He stops himself, “My mum and dad are my biggest supporters. I really am thankful to them.”

The competition was run in 2016 as a joint venture between Education Perfect, a leading online learning platform and the Australian Science Teachers Association.

In 2015, The Australian Government committed $12 million to restore the focus, and increase student uptake of, science, technology, engineering and mathematics (STEM) subjects in primary and secondary schools. This came in addition to $5 million in 2014.

In 2013, the Office of the Chief Scientist noted: “As we position to meet whatever challenges lie ahead, a vital part of our investment must be in the whole Science, Technology, Engineering and Mathematics (STEM) enterprise – all levels of STEM education and research.”

With a passion for science and creativity, Stanley is well on the way to achieving his dream.