Whilst most students spent their holidays relaxing, Joshua Pratt was competing. Crouching toe-to-toe and barrel to barrel with the best shooters in Australia. And it was well worth the effort.

The Westside Christian College student, aged 14, took up the sport only two years ago. In that time he has rocketed from F-class to National Champion in Target Rifle C Grade. The Open Age category meant he was competing against people who have been shooting since before he was born.

Only twelve months ago, the Natives sharpshooter took victory in the C Grade Queens Target Rifle State Championships. From state to national champion in twelve months is a feat rarely accomplished. For his efforts he was awarded by Gordon Duncan, President of National Rifle Association of Australia.

Josh has achieved something remarkable and it’s worth celebrating. 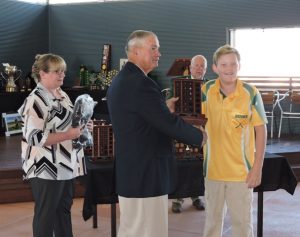 consistency across five straight days is no mean feat at fourteen. There were two separate competitions in the series. Joshua won both individually and then a grand aggregate of the 5 days.  Overall there were 17 ranges to compete in, each with 10 shots from 300 yards to 1000 yards. Joshua can accurately hit a target at almost one kilometer away.

Fresh from this victory, the Year 9 student recently competed for the first time in B Grade at the Beaudesert Prize Meeting, taking first place. On his achievement, Joshua Mansfield, Head of Secondary notes “the next step up is A Grade. Josh has achieved something remarkable and it’s worth celebrating.”

His parents, Vicki and Craig, are elated about his prospects. Reflecting on his success, they wrote “it is very tough once you get to A Grade as you are shooting against any age group including Australian and World Champions.” If he continues to shoot as well as he is he will be in A Grade later this year. He is currently aiming for the Australian Under 25 Team, who will compete in the World Championships in New Zealand in 2018.

With determination and dedication he hopes to one day compete for Australia on a world stage. At this rate, that shouldn’t take too long. Westside Christian College wishes to congratulate Joshua on an exceptional achievement.