Home News Westside Student Heats up the Slopes at Perisher

Westside Student Heats up the Slopes at Perisher

An electronic board calls the next anonymous skier: 186. 186. His bib, almost invisible in a sea of white, flaps in the howling wind. The Year 7 student’s white knuckles force tight frozen hands over blue-gripped sticks. The gun sounds. Mason Grunsell launches with ferocious intensity down the slopes of Perisher on his way to achieving bronze. And they say Queenslanders can’t ski.

“Very few schools offer this kind of competition. It was worth all the organisation and effort. I’m excited for what the future holds for Mason.”

Between July 4th and 10th, Mason competed in the Interschool Snowsports Championships, placing third in Queensland. Mason, having never raced in any skiing competition before, surprised himself and his 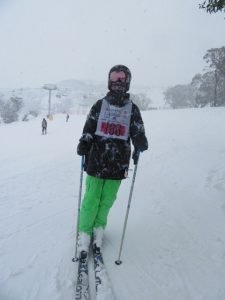 competitors as he held his own, exceeding all expectations. His parents were understandably proud “It was all about him doing his personal best, which he did. He did himself & Westside proud.“

Sponsored by the likes of Westpac and Subaru, the event challenged students in three unique events.

Moguls is a race over bumps and a jump at the end, where the skier, performs a star, grab. He had to complete two runs, where the scores are combined to give the final score. Carving a streamlined path through the gates, Mason’s efforts in the Giant Slalom, like the Moguls, netted him third. Finally, he competed in the SkiX event, something like BMX on snow. He missed a top-three placement by .4 of a second.

Sports Co-ordinator, Lynda Williams praised Mason’s efforts, “Very few schools offer this kind of competition. It was worth all the organisation and effort. I’m excited for what the future holds for Mason.”

The unassuming Mason first touched the delicate powder of the Australian alps at the age of 5. He has loved it ever since. Westside Christian College wishes to congratulate Mason on an outstanding achievement.