The Year 10 Football Development Program has kicked off for 2020, with a candid interview and training session with Brisbane Roar legend, Scott Neville.

Neville, arguably Brisbane Roar’s most famous defender, spoke about his career spanning over 200 A-League games and three Grand Finals. However, the real lessons for students went beyond that: he gave the class sage advice about pursuing a career in Football, and why focussing on education is a very important part of being a professional footballer.  He spoke about how important it is to work hard and understand that it is tough being a professional athlete.  Neville also yarned about his academic goals as he completes his Sports Science degree.

Neville spoke about his career as a Perth, Newcastle, Wanderers, and now, Roar player. 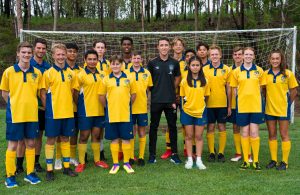 At age 19, he was the youngest player ever to captain an A-League team and scored a goal in the 2016 Grand Final loss to Adelaide. A true legend of the game, students were enthralled by his integrity and honesty, before joining him for a skills session on the oval.

The Football Program is a development program, which means anyone can participate. – Mr Crook.

The Football Program runs over two years with Mr Daryl Crook as the Co-ordinator.  The first term concentrates on futsal and then both classes move on to football. The program aligns with ACARA’s Year 9 and 10 HPE Curriculum.

Mr Crook, a competitive marathon runner, smiles as Neville signs his Roar ball, “The Football Program is a development program, which means anyone can participate.  We work hard, but it’s great to see the students’ skills advance quite quickly…” a student reflects, “Football is a great sport – it’s inclusive – we have a fantastic women’s competition in Australia, too – and very clear pathways through the school representative programs.”

As magnificent as it sounds, this is not the first time Westside students have connected with Brisbane Roar. In fact, this is the latest in an ongoing partnership which has seen skills increase dramatically and students feel a sense of camaraderie and connection to the most popular sport in the world.

No matter whose colours you wear, there’s a place for you in Westside’s Football Development Program.