While most students relaxed these holidays, four students from Westside Christian College were proving themselves amongst the next generation of Queensland neuroscientists at the Brain Bee Challenge state finals. For one student, this is just the beginning of the journey.

Organised by the prestigious Queensland Brain Institute at The University of Queensland, the Brain Bee Challenge aims to motivate students to pursue careers in neuroscience.

Year 10 students, Markus Brits, Nicole McGrath, Kelly Seager and Lexie Martin were among 137 young competitors from across Queensland who competed.

Markus, the cricket-loving, unassuming fifteen-year-old, finished third in the state, an outstanding achievement. 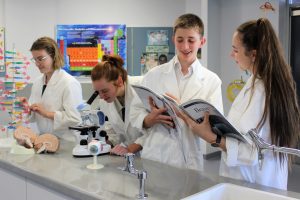 While most adults would struggle to define terms like dopamine or basal ganglia, Brain Bee contestants were well versed in a range of topics related to intelligence, memory, emotions, stress, ageing, sleep and Alzheimer’s disease. Students were given university-level texts to study in preparation, including those published by The British Neuroscience Association.

Brain Bee Queensland co-ordinator Associate Professor Bruno van Swinderen said finalists had an opportunity to tour QBI’s research facilities and be exposed to cutting-edge research. In his characteristic South African accent, Markus recalls “One look at QBI and I knew this was the career path for me. Neuroscience is the science of the future. This competition helped me to see that.”

“The state final brings together some of the brightest young minds we have in Queensland, who are exactly the ones we’ll be relying on to become the next generation of scientists,” Associate Professor van Swinderen said.

His sentiments are supported by Nola Leverton, Instructional Dean of Science at Westside, “These are great results. These four students are well-supported by their Science classroom teachers and support staff and we celebrate their results.”

Mr Joshua Mansfield, Head of Secondary noted, “we are delighted that so many of our Year 10 students jump at the chance to participate each year. To share in the excitement in hearing of their success in this competition is just a further blessing.”

Student Lexie Martin, reflecting on the under-representation of women in science, smiles “Three quarters of Westside’s state finalists are females. We’re changing the face of science in Australia.”

Westside wishes to congratulate our Year 10 students on outwitting and outcompeting over 1000 entrants from across the state. A fantastic effort.