Star athlete Txai Anglin continues to rise through the ranks of Australia’s next generation of athletes, clocking a stunning time of 56.00 at the Australian Athletics Junior Championships on Friday.

Competing against the strongest athletes in her age group, the thirteen year old Westside Christian College student came from behind to win by a comfortable 10 meters in the U15 year girls’ 400 meters final.

Txai recalls crouching down at the starting blocks. Her eyes firmly fixed ahead. She takes a breath, “I felt good. God had planned out what was ahead for me. All I needed to do was be thankful.”

In the space of twelve months, she has shaved more than 2.5 seconds off her time. She puts it down to hard work and humility, “athletics helps me keep focussed. My mum (or dad) drives me to training three-to-five nights a week. I don’t think they could ever know how grateful I am.“

Like her hero, Usain Bolt, Anglin is a born runner with a long stride. The all-round talent carries on a proud Jamaican heritage of outstanding sprinters, with a dash of Australian flavour. Rounding the bend at 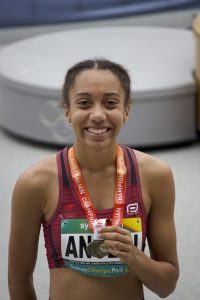 Homebush Olympic Stadium, her ears were suddenly filled with the sound of family, “they were over the moon! The Anglin clan were screaming louder than anyone else.” After the race she could be found hugging her fellow runners.

Txai is the second national 400 meter champion to emerge out of Westside in the past six years. Both have been guided by expert coach, Jo Spyro, a familiar name for those involved in athletics at the College. Thinking about the community effort she reflects “My mum, dad and church community are my biggest supporters.” To add to this, during competition season, she can expect to compete at least once per week, training upwards of three times a week. “Westside teachers have helped me stay on track and have been really flexible with me.”

Lynda Williams, Sports Co-ordinator at Westside Christian College couldn’t be prouder of Txai’s performance, noting “to qualify for Nationals an athlete must run a qualifying time at State level first,” adding “if Txai can dominate at the upcoming State she may go on to be one of only twelve in her age group selected for National Little Athletics championships.” Williams is adamant that, “with her dedication and commitment, she will have a strong future in the sport.“

Txai’s vision has not changed since she came to prominence last year, “My dream is to compete for Australia in the Commonwealth Games in 2022 and the Olympics in 2024.” When asked about her race plan, the nation’s strongest finisher smiles “that’s one secret I can’t give away!“

Whilst the star of the track, the humble Txai is really a team player at heart, playing saxophone in various College bands. When she’s not setting records, she pursues her other passion, musical theatre. Anglin was invited to audition for the Sydney and Brisbane production of The Lion King and has performed alongside Christine Anu and Simon Bourke in Harvest Rain’s recent performance of the hit musical, Hairspray. When asked what drives her, she responds “Your talent is God’s gift to you, what you do with it is your gift back to God.”

Westside Christian College has been a pivotal part of the Goodna community for more than 40 years. It is a co-educational school from Prep-Year 12, spread across two spacious campuses.