Hands-up if you like camping enough to march across a freezing creek, cart over 250kgs of firewood and set up your tent in the pouring rain in one of Queensland’s coldest valleys. BOBS blokes do!

Building Outstanding Blokes (BOBS) is a men’s mentoring program unique to Westside Christian College. On the Thursday before the mid-year holiday, thirty-four very excited BOBs boys arrived at the annual BOBs camp at Gordon Country, Black Cockatoo campsite. The days leading up to it were wet, and the bus drivers were worried the bus may not survive the muddy, twisty road to the site. Teachers and students were watching the clouds closely and were blessed with an occasionally dry tent set-up on the other side of the pristine creek (famous amongst BOBS boys for its yabbies: yum!) which all managed to cross without falling in, although many feet got wet.

“And as for the camp, well, it’s just a beautiful mixture of chaos and fun, the tranquillity of nature destroyed by the noise of 36 boys and their seemingly never ending packets of marshmallows.” – Mr Mansfield

The boys worked well in their Brother-Band groups to claim an area and set up their mini tent village surrounding the obligatory, well-stocked camp fire. After spending some time collecting fire wood, some bands managed to get their fires going quite well, while others struggled to light the green sticks and grass they had gathered. This was made more difficult by the downpour, which set in for the afternoon. They all worked together so that every group had some flames to keep them warm and to cook on. Some made it just before the sun went down. And then the skies cleared to a beautiful sunset amongst the sounds of kookaburras. One of them would steal a teacher’s breakfast the next morning, much to the delight of the students. 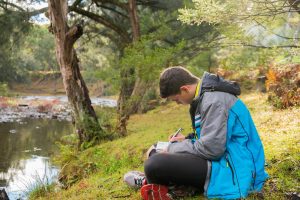 A student quietly reflects during a moment of down-time at the 2018 BOBS Camp.

As the sun peered out long enough to gather around the communal fire, Mr Mansfield, Head of Secondary, led an inspirational devotion for the boys. The rest of the day was spent kicking a ball, building dams across the creek, going for a walk, rolling tires down the steep hill, sitting around the fires and drying shoes, warming ourselves and enjoying each other’s company. After dark the boys organised a game of spotlight and of course toasted marshmallows (and all sorts of other objects; don’t ask).

It’s well-known that Mr Mansfield’s favourite school activity is BOBS camp. A former BOBS co-ordinator, he reflected “Our BOBS program is a big commitment from our male staff members, but one that is worth every bit of that investment. The relationships are strong, the boys look up to the teachers and ultimately the teachers point them to Jesus as the ultimate role model. And as for the camp, well, it’s just a beautiful mixture of chaos and fun, the tranquillity of nature destroyed by the noise of 36 boys and their seemingly never ending packets of marshmallows.”

The night wasn’t too cold (no frost this time) yet some of the campers were stoking their fires at 4.30 in the morning in order to keep warm. Teachers were hoping for another below-zero year, but settled for a 4:30am sleep-in.

It was such an encouragement and blessing to see everyone working together so well. For some of the boys it was their first time to camp, first time in a tent, and first time to build a fire and it was a privilege to be part of this. As a staff, we praise God for the great weather and a wonderful time enjoying the outdoors and His creation and we are already looking forward to next year.