Booth Goes Toe-To-Toe With The Best In The League

The FFA Cup will make a welcome return to the Australian sporting scene this weekend with the first Preliminary Round matches of the 2021 iteration of the competition to be held in Queensland. After a twelve-month hiatus due to COVID19, Australia’s best are strapping up their boots and heading back onto the field. And with them is Year 12 Westside student, Harrison Booth.

Harry Booth has been chosen as part of an elite team of referees to blow the whistle in Round Two of the Westfield FFA Cup. This is the National Knock out Competition – A-League Team, Adelaide United, is considered the one to beat, having won it three times in the past. 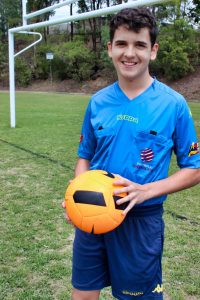 Harrison Booth prepares to referee for the FFA Cup, an elite-level national competition.

Reaching the highest levels of any aspect of a sport involves grit and a love of the game. Harry has worked his way up through the ranks of the Refereeing Association to find himself in the highly-sought-after position of being selected to officiate for three Round 2 games over the course of the weekend of 12-14 February. The fact that Harry has not finished high school is not lost on him, “This is an incredible opportunity!” he gleams.

This is a remarkable achievement.  Next stop, the A-League.  Harry lives and breathes his refereeing. Despite the challenges facing officials, he continues to build his resilience and competence and make his way up the ladder.  Harry said ‘I’ll probably cop a little bit of abuse from the spectators this weekend, but it doesn’t really worry me.’  He’ll need to continue to build his resilience if he’s going to succeed at the highest level. Head of Secondary, Joshua Mansfield, himself an avid football fan, reflects “he’s come a long way at Westside from the shy student he was in Year 7.”

Westside Christian College looks forward to seeing Harrison out the middle at Suncorp and Dolphin Stadiums refereeing a Brisbane Roar game in the not too distant future.

Westside Christian College is home to a strong, inclusive football program, which frequently partners with the Brisbane Roar in developing and coaching its players.