Have you ever stared at the sunset and been left speechless? Have you ever felt the highs and lows of the human condition and wondered how you could ever put words to the experiences? For Abigail Lawrence, a picture says 1000 words, and then some! 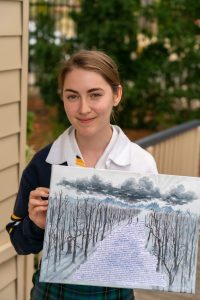 Abigail’s debut work, Fractals, is more than words on a page. Take a closer look and you’ll notice the intricate canvas she has painted, literally! Reflecting on her first effort, she states “The idea came to me while learning about Seasonal Affective Disorder in a subject called Design. We were trying to develop a human-centred solution to alleviate its effects. I didn’t think it would lead to this.”

Joshua Mansfield, Head of Secondary at Westside notes, “What we see here is remarkable, but not totally unexpected. Our subjects are well-integrated, so to see one feeding into another and then another is a pleasing outcome.”

Trying to imagine a season-long trudge through the greys of life set Abigail’s imagination into overdrive. What became an image of a person in the snow became a shape poem, which became paint on a canvas, carefully-placed words, and a moment of deep understanding. To see Abigail’s work is to immerse yourself deeply into fragmented words, the paint, the texture, and the hope for a brighter tomorrow. The poem moves us across media.

Like so much good art, Abigail’s poem is both stirring and challenging. You look, take a breath, and feel.

Abigail, best known for her highly-awarded visual art creations, is humble about her achievement. She

rubs her thumb over the edge of the canvas, “I’d never considered writing poetry before; I just wanted to try something different. I knew I wanted to say something new.”

Year Twelve classmate and friend, Sarah Maddox, achieved a Highly Commended award for her short story, placing her in the top five in the state. This rounds off an incredible achievement in the midst of an unpredictable year.

Sponsored by the English Teachers Association of Queensland and Penguin Randomhouse Australia, the IEU Literary Competition is open to all students in Queensland and Northern Territory. The competition sees thousands of entrants compete for top honours across a variety of categories. As the winner in the poetry category, Abigail has been awarded a cash prize of $300. She has been invited to submit a reading of her work before an esteemed audience of industry insiders. This year, a virtual ceremony will replace the traditional industry-hosted awards night.