Brains Buzzing Ahead of State Finals

On July 19th 2016, six Year 10 students from Westside Christian College will descend upon UQ’s Queensland Brain Institute to compete in the state finals of the Brain Bee Challenge.

Chosen from a field of over 5,000 students across Australia and New Zealand, these six are not simply competing for a place in the national finals. 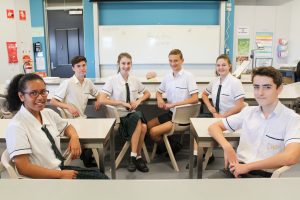 On the day, they will visit QBI’s labs, the MRI unit, and meet and greet Australia’s premiere neuroscience researchers and hear their keynotes addresses. Instructional Dean of Science at Westside, Nola Leverton, is humbled by their achievements “To get six students into the State Finals is big for any school – we have only ever achieved that once before in the 8 years we have been participating.”

The six, consisting of three males and three females, will have the opportunity to compete individually, as well as in a team of four. In the team challenge, students will strive to win science equipment, which will ultimately benefit their studies in the coming years. It is also a chance to secure their futures. Year 10 student, Michael Kleynhans is excited about the prospect “Science is a team sport. It’s all about collaboration. It will be a great opportunity for me and the school.” Maddison Hamilton, who also has plans to study science when she graduates, nods in agreement.

Women are a minority in the field of neuroscience. In 2009, Westside Graduate Heidi Walkden was so encouraged by the competition and the research possibilities at the Queensland Brain Institute that she chose to enter the Medical Research Field in Neuroscience. She is now completing her Masters in Neurobiology.

The competition is designed to promote the study of neuroscience as a multidisciplinary endeavour. According to the Australian Brain Bee Challenge website, this encompasses all basic scientific disciplines including mathematics, physics, chemistry, biology, engineering, psychology, medicine and bio- and nano-technologies.

Westside Christian College wishes to congratulate our Year 10 students and wish them all the best in the next round of competition.