Players Put Through Their Paces with Professional Footballer Danielle Davis

To prepare for the upcoming Touch Football Season, Westside ran a Development Afternoon on Friday 14 February. This time, they were joined by one of Australia’s greatest football players, Danielle Davis.

Westside has always been known for its formidable touch football teams. But this year, Westside has taken it to a new level. Current Australian Women’s Touch Football player, Davis, who has played for the Parramatta Eels Touch team in the inaugural final against the Brisbane Broncos, provided students with elite-level tips and coaching.  She spoke of her passion for the game, gave the students quality advice for their own development, including the latest updates in coaching techniques. Staff and students walked away with a unique set of skills and ambition. 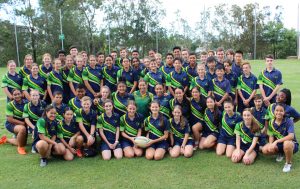 The students were privileged to spend time working on drills in front of the watchful eye of their coaches and Davis, who even joined in on a couple.

‘I was glad to learn a few tips and tricks for myself as a coach of Touch Football.’ – Mr Davies, Coach.

Mrs Williams, Head of Sport said ‘It was great to have a player who is at the top of their game come and visit us and be so generous with her time.  She inspired the players and gave them a few tricks and tips along the way.’

These camps are not only crucial for students as we prepare for the season, but they’re also fun and inviting, and especially exciting when we manage to have experts come in and help us achieve our best.  Williams continued, ‘We’re looking forward to hopefully picking up a few more Touch Premierships in 2020, but most importantly, we want players to be developing their game and enjoying the process.’

Davis grew up on the Northern Beaches and made her way through the development pathway reaching the pinnacle of her sport.  Just last year she was involved in the World Cup-winning Australian team. Recently, she signed for the Gold Coast Titans.

Students had the opportunity to hear stories of backyard battles with her family, and the ups and downs of exceeding gender expectations, playing in a sport that is still considered amateur.

Mr Davies, Touch Football Coach said ‘I was glad to learn a few tips and tricks for myself as a coach of Touch Football.  My players were completely engrossed in the afternoon, and enjoyed meeting a real pro who certainly knows a thing or two about Touch Football.’

Stay tuned as Westside makes another play at the finals in 2020.