An exciting year of partnership with the Brisbane Roar concluded with a visit to Suncorp Stadium to witness a stunning win over Melbourne City FC on Saturday night.

It has become an annual tradition at Westside for Years Nine and Ten Football Class students to see the year out with a Roar home game. It meant all the more this year, with students having undertaken a nine-week coaching program, run by the Roar.

The very same skills, tactics and formations were on display on Saturday night. Students watched with a knowing assurance as the real-world coaching was enacted by some of Australia’s best. One student exclaimed, “everything we analysed during the year came out here tonight. It was awesome!”.

The ‘front three’ formation which Roar Coach John Aloisi employed has taken some getting used to for students, but having seen now how the way the formation works, and how it contrasted to the high possession strategy of Melbourne City, students cannot wait to use it in their campaign to the premiership next year.

Despite not having much of the ball, the Roar were able to win two-nil, and our Football Class students were able to stand and cheer as the Roar celebrated their first win of the season. 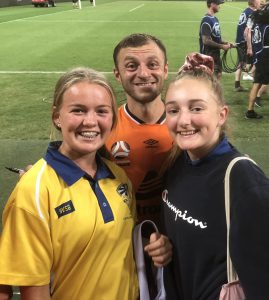 As a climax to the night, students were able to meet the players and collect autographs.

Head of Secondary, Joshua Mansfield, added “We were so excited to have the Brisbane Roar present our Term 3 Year 9 Program this year… it was great to see Neil and the other coaches at Suncorp Stadium.  We’re looking forward to next year’s program as we seek to increase our skills and get even more players out on the field learning and loving the world game.”

The students enjoyed the opportunity to celebrate the conclusion of the year and represented the College well. In fact, observant fans watching the telecast live will have noticed the ‘yellow shirts’ standing and cheering on the television after the first goal was scored.