Home News A Taste of China for Hungry Year Nines

A Taste of China for Hungry Year Nines

There is nothing quite like cultural immersion for fostering a life-long love of languages. Just ask our Year Nine Chinese students.

Chinese continues to grow in popularity at Westside Christian College. In a decade marked by the meteoric rise of the Chinese economy, these students could not be better equipped for the future.

On Friday, the Year 9 Chinese class celebrated the end of a big year of learning with a visit to a Little Lamb Hot Pot and BBQ restaurant at Eight Mile Plains.  Rehearsing how they would introduce themselves, order food and offer thanks, the students were eager to demonstrate their proficiency and immerse themselves. In China, food is an integral part of the culture, drawing on language, mannerisms and social conventions. 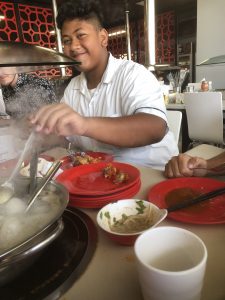 Chinese Teacher, Mr Tom Baskerville had prepared the students for the task of engaging with Chinese culture through the Chinese BBQ and hotpot which were placed on the tables. Suddenly, the learning had become very real and the Year Nines were ecstatic to converse, order and learn in a real-world environment. Students chose different delicacies, with some being braver than others. Here, the students were able to refine their language skills through discussion and debate across the table and soon were trying to figure out how to say ‘I’m very full’ in Chinese.

Chinese has been offered at Westside now for two years in both the primary and high school, and we are excited to see the subject growing with an increasing amount of students electing to study it in Year 9.

Westside’s Head of Secondary was excited at the prospect of increasing numbers studying Chinese, ‘We know that Chinese is an important language to learn in the current global climate and Mr Baskerville is doing a great job at engaging students, giving them real-world experience with this language and helping students see the cultural relevance of studying Chinese.’

Westside Christian College, preparing students for a changing world since 1977.