Imagine staring down the barrel of a rifle, dirt whipping across your eyes. Your ears are filled with roaring as 70 km/h winds rush by. 900 meters away a small target dances in the gale. Now Imagine being asked to hit the centre. 100 times. Now imagine doing that whilst world champion Ben Emms watches your every breath, your every twitch. For three days. Now take a breath. Hold it. Squeeze. Could you do it?

On Sunday, the unassuming Joshua Pratt was crowned the best B-Grade shooter at the Queensland Rifle Association State Titles held at the Belmont Shooting Complex. The three-day event came on the back of a C-class victory in June. The fourteen year old has only been shooting in this category for two months.

Coming into event, he was hopeful of a possible top 10 finish, aware that in the same competition were Commonwealth and World Champion full bore shooters and 100 others. An intimidating prospect for someone who only took up the sport two years ago. 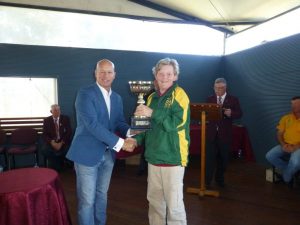 For his efforts he was awarded the Queens Badge, an elite prize, trimmed in real gold. In the 150+ year history of the Queensland Rifle Association, Joshua may well be the youngest B-Grade winner.

On the first day of competition he was sitting at a respectable 9th place, ahead of his top ten goal. On the second day, 40 knot winds had competitors second-guessing their game plans. This is where Joshua’s determination shone through. As the range extended to 900 yards, a sense of determination and nerves of steel saw him in third place, three points behind first.

With only one day left, the event was his to lose.

True to form, the EKKA winds beat down the targets, throwing them about like toys. Under this pressure, where even Commonwealth Games competitors struggled, the Westside student shot a phenomenal 48 from a possible 50, climbing to first place. Two of those shots were dead-centres.

Then came the 1000 yard mound. Craig Pratt recalls “his mother Vicki was so nervous she wanted to vomit!” Yet Joshua remained calm. He nonchalantly crouched into position and fired away. By the end of the session, he had outshot most every competitor in A-Grade, including the elite Palma Team and current world champions to claim first place.

The three day aggregate score left the newcomer just 10 points behind Ben Emms, current World Champion. Emms is considered one of Australia’s best hopes for a Commonwealth Games medal. Joshua finished two points behind the current Australian Under 25 Champion, who is also competing at the Games. Over the three days, Pratt hit the centre of the target 30 times.

The Queens Prize, held between 17th and 19th August is steeped in tradition. Queen Victoria instigated the Prize when she put up a purse to encourage better marksmanship by troops in the post Boer War era.

Full bore shooting is a Commonwealth Games sport. Joshua Pratt is well on his way to becoming its champion.